My Christmas week, if you will, has been ruined by the flu. I left work early on Christmas Eve (even in spite of the fact we were getting out early any way). Christmas Day was spent mostly isolated and on the couch. And the past three days have seen me in a constant state of sweating, freezing, coughing, and wheezing. A lot of wheezing.

During these last five days, I’ve also watched a lot of episodes of Ancient Aliens on H2. More than what’s probably considered healthy actually. And for the record, yes. I honestly do believe in extraterrestrial life. After all, I am a rational human being.

Yet two important points have really been weighing heavily on my sick, fever-induced, cold sweating mind…

I’m not sure what sort of ancient drugs the Greeks, Romans, Egyptians, or whoever came up with the concept of these ‘constellations’ were drinking, inhaling, or consuming far past the definition of “recreationally” – but there is not a single image or shape in the sky that looks ANYTHING like that of which it’s named.

The one exception: the Big Dipper.

The movie “Baseketball” (1998) did a great job of making fun of this – with Charleston Heston as the VoiceOver I believe – but the proof is really in the proverbial pudding: Orion doesn’t look like a hunter. And neither of the Ursas should remind anyone of a bear.

They may have once had a purpose in global, seafaring, navigation and intercontinental trade but not so much today.

Some will argue that mankind is ready. Eager almost for proof that we are not alone. While I consider myself one of those who want proof of alien life, I also envision a trickle down effect that would unravel the three major religions (at least) and cause a lot – and I mean A LOT – of lost power, revenue, and dare I say control.

Stories in the Bible would have alternate, and certainly plausible, explanations other than being attributed to God. Questions concerning the Koran couldn’t all be answered by just appealing to “God’s will” – which we humans aren’t meant to question or understand anyway.

And certainly don’t underestimate man’s inability to change; to accept other lines of reasoning to long-held beliefs. History clearly has shown that when religious doctrine comes into question or gets challenged in any significant way, war and death soon follows.

Now. Does this mean I’m questioning my own religion? Or that I’m now an Ancient Alien Theorist? Not at all. I just believe there is so much more we need to learn and to understand.

And more importantly, that it’s ok to question the norm. 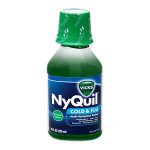 Fortunately, we live at a time where information is readily available. Facts are at our fingertips and there is never a shortage of theories, conspiracies, and alternative explanations.

Unfortunately, five days with a 100+ fever and a body overflowing with NyQuil has severely inhibited my own ability to find any concrete answers (and apparently blog coherently as well).