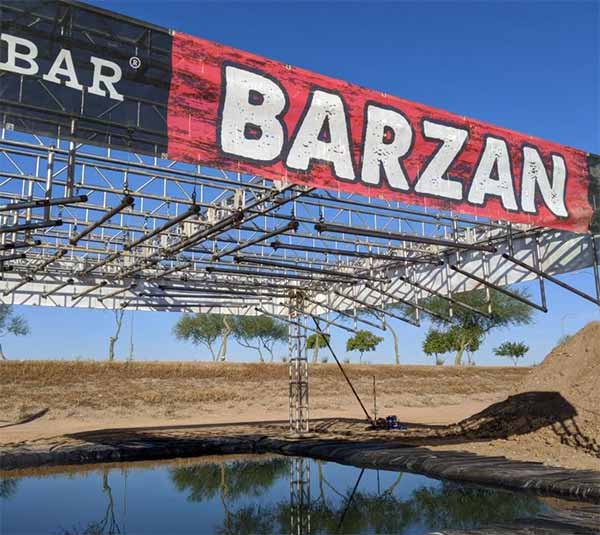 From top to bottom, Rugged Maniac is easily one of the best obstacle course race (OCR) series out there. From the obstacles and volunteering to prices and the community – I love Rugged Maniac and look forward to each time they come to the area. I would also say that their finisher shirts are among the best and their medals are actually more than good. They’re grrrreeeeeat. (Ok. That was frickin ‘cheesy.)

This past weekend marked the fifth (or sixth?) time I have ran Rugged Maniac and again they did not fail in delivering a solid experience.

Getting a free race entry is actually the second best perk of volunteering at an obstacle course race. Hands down the top reason to volunteer is being up close and personal with a lot of incredible athletes and inspiring people.

I spent the morning at an obstacle called “Barzan” – a series of vertical and horizontal pipes over a pit of water (think “monkey bars on steroids”.) Though I’d have to guess this has an 80% fail rate, at least when you drop – it’s into a 4-foot pool of water. The laughs, the shrieks, the losing of hats and sunglasses all reflected people’s enjoyment of this one.

Surprisingly, more than a few racers elected to skip this one; apparently knowing their limitations and understanding that they (probably) could not complete it. Which is fine. But it was so cool to watch the others test, and even surprise, themselves on a rather difficult obstacle. (Though more on this later.)

I’m going to get this complaint out of the way now: the race venue was at a spring training baseball facility and, understandably, doesn’t allow for the perfect layout of 23+ obstacles on a 3.1 mile course. There are really two areas – a parking lot and a dirt strip – in which to pack them all. The parking lot had six obstacles while the dirt strip had 15 (see map).

This caused for a few bottlenecks at multiple obstacles which takes away from the flow of the overall race (not to be confused with the overall fun of the obstacles themselves.)

Barzan. Despite watching thousands of others try while volunteering, turns out I didn’t learn squat. I got up the first vertical bar but failed miserably at the transition to the horizontal bars.

However – and this is something Rugged Maniac needs to address – digging a hole in the ground, covering said hole with a tarp and filling it with water does not necessarily equate with safety. Runners in the outside lanes sometimes didn’t fall directly into the water, but rather hit hard on edge of the pit. One woman, who actually made it to the end, fell on the edge and broke her hand.

Rugged Maniac would be better served to add a bit of padding to the edges of Barzan or provide better spacing where the poles end and the edges of the pits begin.

Off the rails. This is sort of a like a zip line where you run up to a rope, hang on for dear life as you move across a pit of water, smack a cowbell at the end and, inevitably, fall into the drink. I have failed this every time in the past. But not that day. I finally zipped to the end. Though I must say, I was not ready for the sudden stop at the end (though the crash into the water felt nice.)

Full tilt. This is a simple monkey bars obstacle but at the mid-point, the bars tilt downward. I finally succeeded with this at the last race and was looking forward to doing so again. However, this was placed immediately after four thick-mud obstacles and it was impossible to get any sort of grip on the bars. Thus, I failed. Bad, bad, bad placement on this Rugged Maniac. Bad.

Iron curtain. This is just one of those obstacles where Rugged Maniac sort of (screws) with your mind. You slosh about 10 feet in water that’s about 6″ deep and go through a plastic “curtain” if you will. Of course, just on the other side of that curtain is an unseen drop-off where the water goes to about 3-feet deep. I knew it was coming, but still (literally) fell for it anyway.

Fenced In. This is Rugged’s version of Tough Mudder’s Cage Crawl. Unfortunately, the water mostly drained out of it turning in into nothing more than a trench filled with mud.

And it goes on from there. Jacob’s Ladder, Quad Burners, Mount Maniac and the Accelerator (a bit inflatable slide into a muddy pool of water). Surprisingly, there was no Pyromaniac (i.e. a fire jump). When it comes to bad-ass social media pics, nothing beats the fire jump.

I will throw this little anecdote that happened at Claustrophobia (about a 15 yard, pitch-black, somewhat underground tunnel)….

While a few of us were waiting to get in, a woman in front of me was joking about having “mud in her butt crack”. She and her friends played it up and were laughing about it; especially after we just went through the aforementioned Fenced In obstacle.

As we climbed into the darkened trench – she was in front of me – I told her “Hey. At least I can’t see the mud in your butt hole!”

She quickly reminded me that she didn’t say “butt hole”, but rather said “butt crack”.

We shared a laugh and she high-fived me when we got out. She then told the story to her friends which caused an embarrassed me to run ahead at a quickened pace.

Perhaps there’s a lesson to be learned here and that is: don’t crawl up behind a woman you don’t know in a dark area and talk about the inability to see anything in her butt hole.

And so it goes. Another day of volunteering, running, getting muddy, earning a free beer, adding to a collection of volunteer and finisher t-shirts and walking away with the adult version of a participation trophy.

In two weeks, it’s the Spartan Sprint in Laughlin. Two weeks after that, Tough Mudder. Yeah, my ankles still hurt and I might have tweaked a few (more) muscles, but I wouldn’t want it any other way.