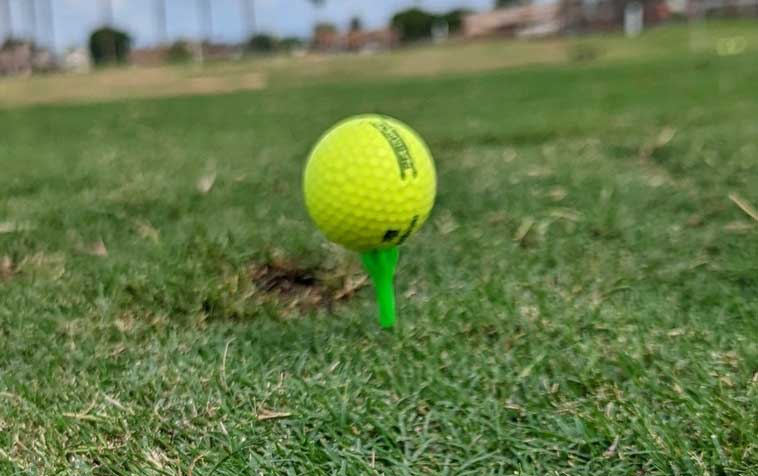 People a lot smarter than I choose not to play golf on a 108° day in Arizona. It was a mantra I have said many times the past which is precisely why I was I approaching the first tee with the plan of playing a quick-9 before skin cancer could become a potential topic of discussion at my next doctor’s appointment. Playing golf about 100 feet from the sun leaves little time for practice swings and even less time for searching for lost balls. Nine-holes in an hour and 15-minutes was achievable goal.

Somehow there was another golfer ahead of me. A single player who — and I am speculating here — did not own a watch or have any concept of time. Or other people. Or the game of golf.

After a 220+ drive (surprisingly in the center of the first fairway), I found myself sitting in a hot cart literally alternating between Facebook and observing this guy on the green. Twenty seconds go by. Thirty seconds. Finally, I see him walk off.

Shot number two went high and semi-long and rolled about 5-feet short of the green, just off the fringe. I hit it flat, but left myself with an easy punch. As I approached my ball, I a) see another ball about 10-feet from the cup and b) the guy walking back onto the green.

He had not finished the hole! What’s worse: I had hit up on the guy (which I think is covered on page one of any given Golf Etiquette for Dummies book as part of a big, bolded, list titled “How not to be an asshole on the course”.) He was close enough where had there been a slight breeze, and fortunately there wasn’t, no doubt he could have spit on me as I sat there watching him putt-out.

“Sorry man,” I said. “I saw you walk off the green and thought you were done.”

“I was fucking putting!” he responded somewhat, and understandably, testy.

“Again, I’m sorry. It’s just that I saw you walk off the green and…”

Read that again: “I forgot my putter.” I guarantee you have never seen Paul Goldschmidt standing in the batter’s box with the bases loaded, staring down the pitcher, before realizing “Hey. Has anyone seen my bat?”

On the par-5 second hole — he proceeds to tee up two balls. After driving to the aforementioned balls, he leaves his cart on the cart-path, proceeds to take a 90-degree stroll towards both balls and after hitting both second shots, slowly walks back.

And I am again on Facebook and Twitter and checking email and texting a friend and watching from afar in confusion.

He then picks up his balls and quits the hole.

Two holes later, while at the par-4 fourth hole tee-box, I observe him sitting in his cart in the fairway. A minimum of two minutes tick by before he gets out and hits his second shot where he, again, proceeds to pick up his ball and quit the hole.

Now let’s say it took me seven minutes to finish the fourth hole. I am guesstimating. Turns out, this guy has been waiting that entire time sitting in his cart on the next hole: the par-3, fifth hole. For seven minutes.

I know what you are thinking, and trust me I was thinking it too: this dolt is finally going to let me play through. I park my cart behind him and begin to get out when he literally floors it and takes off to the next hole. He completely skipped hole number five.

For those keeping score at home: he forgot his putter on the first hole, quit the second, quit the fourth, skipped the fifth, quit the sixth hole and went home.

Of course I’ve been speculating since why anyone would do this after doling out $30 in green fees. Perhaps there were problems at home. Maybe he had explosive diarrhea (though we can likely discount that as he completely bypassed the on-course bathroom on the 6th hole). He might have just been hot. It was 108° remember?

Maybe – though doubtful – he woke up that morning with the sole purpose of wanting to piss me off. The world will never know.