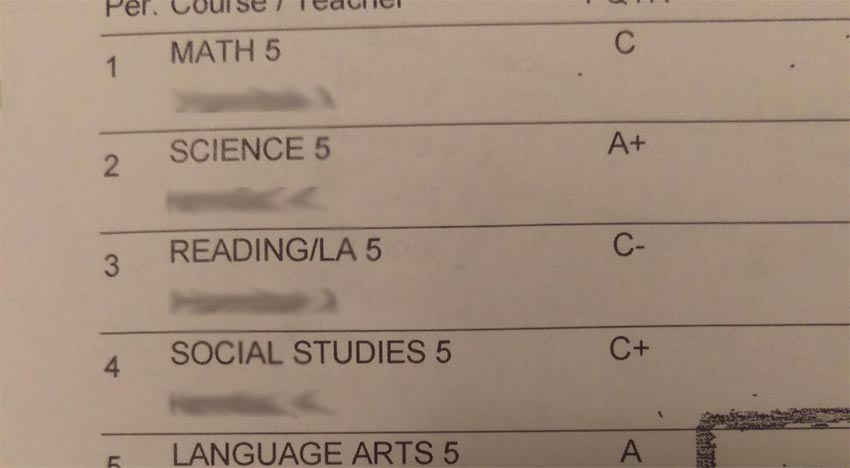 A couple of days ago, my wife and I met with our son’s teacher for a parent-teacher conference. Like all of these meetings, we reviewed some of his in-class work, discussed the good grades (and the bad), his progress, his attitude, his class participation and so on.

After complimenting my son – who has autism – for his efforts in class and how well he’s doing, she handed us his 1st quarter report card.

I never once thought I would be happy to see three C’s on my son’s report card. And initially, I wasn’t.

Then the teacher went on to explain that these are the grades he earned. There was no special treatment given because of his autism. No grading curve. There were no added points, extra credit or consideration given because he is on an IEP (an Individualized Education Program).

He was graded using the same standards as everyone else in the class – and got three C’s and two A’s.

This was all him.

For the past couple of years, Matt has been slowly moving away from a special needs classroom and integrating himself into a mainstream classroom. It has been a long transition and this year – for grade 5 – it was decided that he was ready to be immersed full time in a regular class.

No doubt it was the right call but I still felt a lot of trepidation. Here was a kid heading into grade 5 without the full benefit of having gone through grades one through four.

I remember years ago having a discussion with my uncle about Matt’s ceiling and his ability to learn what everyone else learns; whether he could advance through school as opposed to just being pushed through.

Though it wasn’t much of a debate, we both agreed that it was better to struggle in a regular class than excel in a special needs class.

As all of us were looking over and discussing his 1st quarter grades, it was interesting to see the disappointment in Matt’s face. It was clear that he was expecting better than three C’s, but I’m not so sure he understands just how incredible those grades really are.

I obviously don’t know what the future holds, but can certainly see the present staring me right in the face. All of Matt’s hard work is paying off; he’s proving he can succeed in a mainstream classroom.

To everyone who helped push him to this point – and there’s truly too many to mention – thank you.