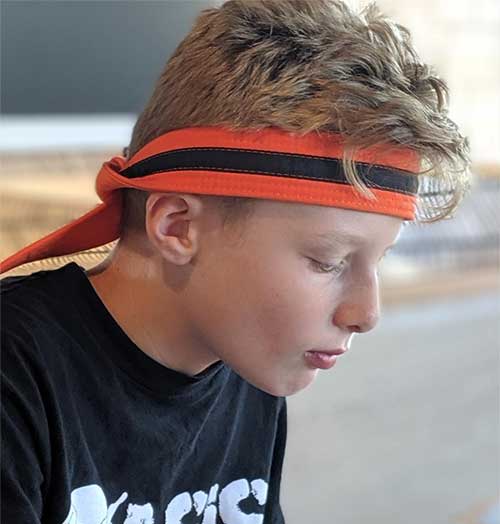 This past Monday, my wife and I attended an IEP (Individualized Education Plan) meeting with several of our son’s teachers, school psychologist and therapists. To say it went well would be an understatement.

It was incredible! And we walked away with some very good, and certainly encouraging, news.

Since being diagnosed with autism prior to age three, Matt has spent hundreds – if not thousands – of hours in speech, occupational and developmental therapy. Every school he has attended has been been required to provide various levels of support where a therapist would pull him from class and spend x-number of hours a week working on many of the basis skills autism had taken from him.

“This is what we had always hoped for.”

As we were sitting in the meeting listening to everyone provide updates on Matt and how he has been doing since starting sixth grade, the speech therapist talked about Matt’s progression, how he has been exceeding previously set goals and had announced that, in her opinion, Matt no longer needs speech therapy! (Well, at the very least, he has moved past the requirements needed meet in order to receive speech therapy at the school.)

So in a matter of weeks, Matt has graduated on (if that is the right word) from receiving both speech and occupational therapy at school!

Admittedly, I was a bit torn by this news. These therapies played such a huge roll in Matt’s development; from a time when he was essentially trapped inside his own mind and could not speak a word to becoming fully immersed in mainstream classes at school. Honestly? I did not want anything to change that momentum.

Yet this is truly good news.

“This is what we had always hoped for,” my wife told me. And, of course, she is right.

I will never forget when Matt was first diagnosed as having autism. I was clueless as to what autism was, what it meant, how it would affect my life (selfish, I know) and how it would affect his. I distinctively remember asking, “So. How soon will his speech return?” to which I was told “It’s different with everyone. Maybe two years or maybe never.”

I remember losing it. I remember crying. This person sitting in front of me was saying that my son might NEVER speak again.

Yet here we are, all of these years later and now there is a different person sitting in front me saying that my son no longer needs speech therapy; that he’s surpassed another in a long line of developmental goals.

Of course, we still have the bar set rather high. Matt still receives speech and occupational therapy outside of school. In our opinion, he is not done kicking autism’s ass.

So thank you. To the therapists and teachers from the past, thank you and trust me: you would be so proud. To his current teachers and therapists: thank you so very much for pushing him farther. To friends and family who have provided encouragement and helped enforce expectations, you have all been incredible.

Most important, however, is Matthew himself. That kid has put in a lot of hard work to get to where he is today (and he is far from done.) He does NOT consider himself “special needs” and it is probably that label that motivates more than anything to work even harder.

He has autism. He knows it. Though he certainly does not allow it to define him. In a way, this recent news from his IEP meeting is another step closer to making it that much more difficult for anyone else to define him that way as well.

Matt recently gave a little talk at his speech therapy. He worked on it for a couple of months, put together a slide presentation as well as threw in a video clip (from about 2:15 to 5:50.) He wants this to get 10-million views.