Blogging A to Z: C is for Carlin

That’s my motto. “Live and let live.” Anyone who can’t go along with that, take him outside and shoot the motherfucker. It’s a simple philosophy, but it’s always worked in our family.

Quite often in my blogs, I’ll quote something from comedian George Carlin. He remains, hands down, my all-time favorite comedian and for good reason: the guy was frickin’ hilarious! He was topical, witty, and a master of language. 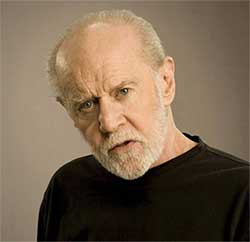 Man. I would love – and I mean LOVE – to see what ol’ George would say about the infighting in Washington these days. Or even the gay marriage debate (he’d be for it, but would have a very unique way of addressing those who aren’t). Hell. Even his thoughts on Justin Bieber would be great.

I’ll never forget, unless I get Alzheimer’s I guess, those days when I read his book – “Brain Droppings” – during my lunch hour. I would literally find myself laughing out loud with tears running down my face while sitting by myself in a lunchroom with perhaps 50 other people looking at me.

Twice I saw him in concert and both times were great.

I’ll end this with a short clip of Carlin on stage; along with some of my favorite quotes…

George Carlin on white people. As he says: “What do white people have to be blue about? Banana Republic ran out of khakis??” (Note: Parental discretion is advised.)