Blogging A to Z: K is for Karma

Just trying to plug along the whole Blogging A to Z series where I pick a letter and just write.

“I can’t be anyone’s boyfriend. I’m karma’s bitch.”
– Earl Hickey from My Name is Earl

I’ve always hated when others start a speech with something like “Webster’s dictionary defines such-and-such as…”. Those talks always seem ‘fake’ or at the very least that opening line usually proved to be an indication that the audience was in for a long, mind-numbing, spiel.

Yet I do need to acknowledge that perhaps not everyone knows the concept of Karma. Literally, it means “action, work or deed”. It also refers to the “principle of causality where intent and actions of an individual influence the future of that individual.” (See what I mean? Mind-numbing.)

Let me give you an example. Let’s say you’re fortunate enough to find $1,000 cash near a garbage can in the park where you stopped to take a leak on your way home from a bar. (Hey, it happens.) The idea of Karma says that if you do the right thing and turn that $1,000 into the police, you will be rewarded for your kind deed. Perhaps in the form a $100 reward from the owner.

On the other hand, if you were to keep that $1,000 – you shouldn’t be surprised if you get hit by a bus on your way to the casino to spend it.

Some tend to believe that Karma is a religious concept and in some ways they’re right: its origin goes back a long, LONG, time and is part of Hinduism and other Indian traditions. Others simply chalk up their experiences in life to either bad luck or good luck.

I really don’t believe in either. I think it comes down to attitude and to putting yourself in situations that dictate whether good (or bad) things will happen in life.

If you volunteer at a homeless shelter, if you allow cars to merge in front of you, if you turn in a $1,000 you found in a park – odds are you’re the type of person who is likeable, has a lot of friends, and finds them-self in overall “good” situations.

Should you spend your spare time picking up hookers, stealing, or back-stabbing others at work – I’d be willing to bet that you’re on a spiraling path of doom that consists of a lot bad experiences and despair.

In the case of the above mentioned Earl Hickey and the TV show My Name is Earl – Earl made a list of all the bad things he had done in life and set out to make-up for each of them. He apologized to those he hurt, he returned items he stole, he began to care about the feelings of others he hurt, and he simply did RIGHT where in the past he had done WRONG.

The results were certainly what you’d expect: he gained more friends and respect; he avoided situations where, in the past, he screwed up; and his attitude changed from “what can I do for myself” to “how can I help others”. 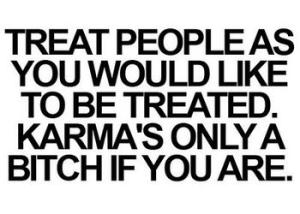 More importantly he was able to earn back trust from others as many of the negative opinions others had of him (and he had of himself) thawed.

Personally, I know that I’m far from being the perfect person but all-in-all would like to think I’m a decent guy. I try to do good. I try to be honest. I try to put myself in better situations than in worse.

Have I been rewarded? Has Karma provided me with more ‘good’ than ‘bad’? Maybe.

All I know is that I’ve got a pretty good life and however I got to this point – be it on my own or with the help of some imaginary cosmic force or ancient religious concept – I don’t really care. I just need to continue to do what’s right and let the proverbial chips fall where they may.

“I’m just trying to be a better person. My name is Earl, err, Michael.”

So, what-say-you oh readers? Do you believe in Karma?