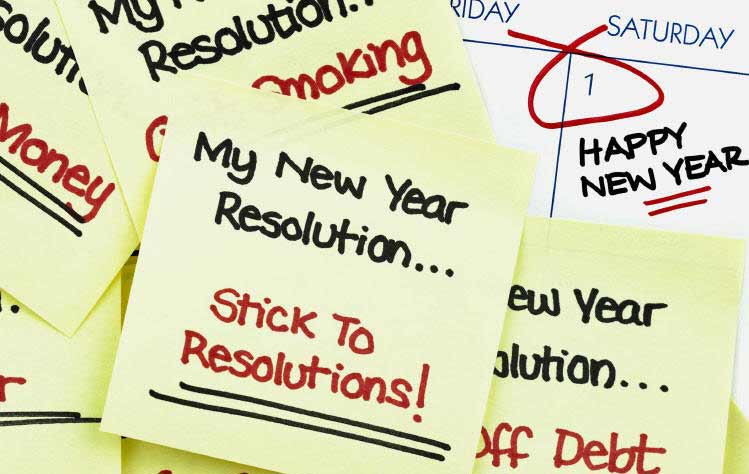 This may be a couple of days late, but the message is still valid. At least I think it is. And as I look back, it’s also a near-repeat of last year’s New Year’s blogpost.

Don’t make New Year’s resolutions. Seriously. Just don’t. Most tend to be nothing but mind-fucks that – while made with good intentions – usually end up in immediate failure within two weeks after January 1st.

People might resolve to quit smoking. Yet the moment they light up, their New Year’s resolution is history.

Others resolve to save more money, but immediately accept defeat after that first paycheck gets spent and is gone.

When you resolve to do something, most often it’s a do-or-don’t scenario; you either succeed or don’t. And once you fail, unfortunately, there tends to be a “better luck next year” attitude. That’s not how it should be.

Maybe it’s just a matter of semantics, but I’ve always believed that the better option for New Year’s resolutions is setting simply setting goals for the new year. Goals, at least, have a longer timeline and aren’t tied to a somewhat arbitrary date based on when the calendar flips and a the year increments plus-one.

Goals also allow for failures. In fact, I’d almost argue that there should be failures along the way when reaching for your goals. So as long as you keep your eye on the prize and focus on the end-result, it’s not only ok, but also expected, to have the occasional slip up.

As Yogi Berra is famous for saying, “It’s like de ja vu all over again!”

I’ve been fighting too many aches and pains. Yeah, it’s a result of getting old(er), but there are things that can and should be done for the lower back, calf problems and more recently, a bum elbow/forearm. My doctor and I will become closer friends in 2018.

Yoga and meditation should also be big components in getting healthier in ’18. (Note to self: YouTube is good for much more than watching Def Leppard videos.)

Currently, I’m signed up for a Spartan Sprint, Tough Mudder, Rugged Maniac and Terrain Race. Four races is good. Five is better. Five is the goal.

In the big scheme of things, I (and I think everyone) just want more life experiences. Running a 5k with my kid, hiking 10 miles in the Grand Canyon, going to Vegas…

In this case, the key is signing up first and then work towards the goal. Just do it. Once you’ve signed up and paid any monies: you’re committed.

I’ve accepted that I’m not a socialite who thrives on friends and company. I love trolling stupid people on social media. I don’t see that changing (and honestly, I’m not sure it needs to). However, I could always raise the bar when it comes to be a father, husband and friend to others.

Oh sure. I could add in goals of finding a better job, learning a new language, saving for a hair-transplant, etc. – and maybe I will – but in the end it’s all about living a good life and constantly improving. Both, of which, should be done no matter what day or year it might be.