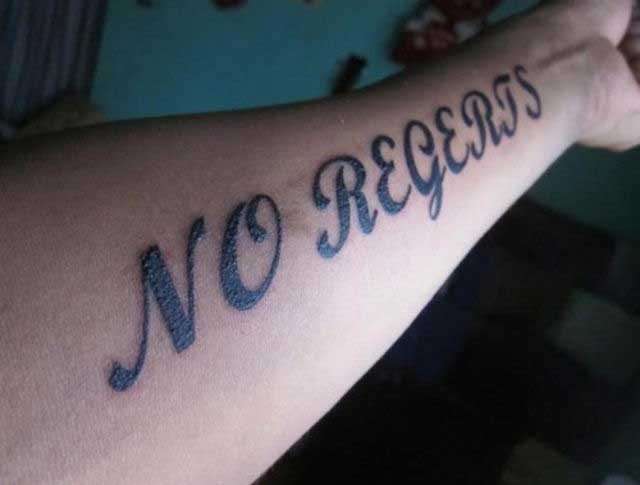 – The Offspring, “Pretty Fly for a White Guy”

For years – decades, actually – I’ve wanted a tattoo. Though as I look back I’m not really sure why other than, of course, I thought it would make me look cool.

Early on, I vividly remember wanting a tattoo of the Noid; the Dominoes pizza advertizing character from 1986. Again, for the life in me, I can’t remember why but all I can say to that is: Thank God/Allah/Buddha/Elvis for age restriction laws on tattoos! That and my grandparents would’ve kicked my (keister) up and down the street.

Can you imagine getting a permanent tattoo from a temporary marketing campaign by what is ultimately a crappy pizza chain in an attempt to look cool? I cringe even thinking about it now.

However, despite dodging that bullet as a teenager, it still never squashed the urge to get inked.

Over the years I thought of a Simpsons tattoo (probably Homer), a Def Leppard tattoo, Rocky the bulldog (the mascot from Western Illinois University), the Miller Lite logo (if you can believe that), some sort of M&M design after the Terror Twins were born, an autism ribbon or puzzle piece and more recently the Chicago Blackhawks Indian Head and/or the Stanley Cup.

If you think about it, all of them – in their own odd way – help tell the story of my life (well, except the Noid) and how I’ve developed as a person. Though based on all of that, I might’ve lived a pretty messed up life to this point…

Which leads me to the here and now.

Yup. That’s a Spartan tattoo. On me.

That’s the Spartan Race logo. And it’s on my left arm.

Why a tattoo? Why now?

This is more than just looking cool – although I think it’s frickin’ awesome. The Spartan logo represents a shift in lifestyle and attitude; something more mental than physical (although I continually try to work on both.) It’s about changing the way I think, act and treat my body.

Too often, people live in a big predictable bubble: we eat, we work, we sleep and repeat. We tend to play things safe and seem content with being dependable and cautious. I’m certainly guilty. But life isn’t supposed to be comfortable nor predictable.

It’s meant to be experienced. However, you want to define that.

Go hang gliding. Start your own business. Run an obstacle race. Move across country. Get a tattoo. Whatever gets you out of your comfort zone.

Challenge yourself: physically, mentally and emotionally.

Too many people focus on the pursuit of bigger houses, faster cars, nicer clothes or a fancy job title; that life’s about accumulating stuff over stories. I hate to break it to you Bruno, but it’s really not.

Would you rather look back on your life wishing you’d worked harder or longer? Or think back on the time you jumped out of an airplane?

This tattoo is now a permanent reminder that I can do (and be) more tomorrow than I am today – as a man, father, husband, person, athlete (wanna be), friend, etc. That lifestyle supersedes just living.