Earned, but with an asterisk (Part 2) 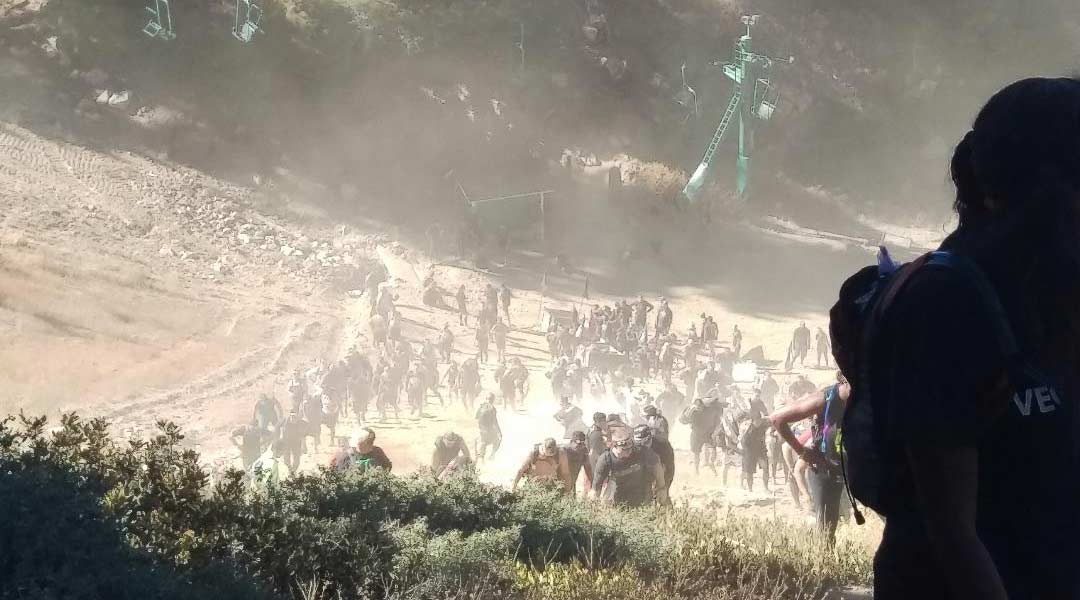 This is Part 2 of 2 and I’m writing this before Part 1 (how does that work??) However, this part of the story is far more important and needs to be told.

Two days ago, myself and thousands of others completed a 12+ mile, 30+ obstacle Spartan Beast in Big Bear, California. Located on an incredibly beautiful ski resort, the course was obviously hilly and extremely difficult. However, as in every Spartan Race – stories from the race are more often than not dominated by the people and those who run them. Not the terrain or race itself.

I was fortunate to be part of a team. The others are all far more seasoned racers and I held no illusions of actually running and finishing with them. I’m used to running my own race and often going it alone.

Though I have to admit, it felt good to be included.

From the git-go, I struggled. A lot. The hills were something I simply wasn’t ready for and I immediately fell behind. They all encouraged me from ahead, but eventually I lost sight of them.

At about the two and half hour mark – barely two miles in – I see Jason; who had been waiting. He had allowed everyone else on the team to move on while he hung back. It was obvious I was hurting and he was there to help and encourage.

Essentially, he sacrificed his race and the experience of running (and finishing) with his wife, son and friends to help me get through it.

That is what it means to be a Spartan and why the OCR community is second-to-none.

Though in what perhaps could be described as a cruel twist of fate, not long after Jason began suffering from cramps. He was in pain and could barely walk.

He was taking salt, eating mustard packets and was trying to massage the knots in his muscles. Nothing seemed to be working. His day looked to be over and, not surprisingly, he told me to go on and try to finish.

Initially I refused. I said I’d stay with him. A thought that lasted about 20-minutes.

I kept looking at my watch and thinking about the first cut off time. “I’ve got about an hour to make it to the Bucket Carry, else I’ll get pulled from the course. I can do it.”

That’s too many “I”s and in that situation, selfishness took over. Though I felt guilty doing so, I told Jason I was going for it and started off. A very shitty thing to do.

Fate should’ve stepped in and broken my ankle.

In a bittersweet moment, I made the initial cut-off and got past the Bucket Carry obstacle in time to continue on to the second part of the course.

However, the doubts had long kicked in. At that point I was about four miles and three and half hours into the race with another seven miles to go and only five hours to do it.

And they were sending us back up the mountain.

No way I could pull that off. Mathematically, it didn’t seem possible. I was going to quit and began looking for ways to sneak off the course; all of which made me feel even worse knowing I’d left Jason back at the top.

In the ensuing internal debate, however, I somehow kept convincing myself to just go on until they pulled me from the course. I became resigned to the fact that I wasn’t going to finish but quitting was off the table.

I don’t recall the time it happened, but as I was making my way back up the mountain – I hear Jason not too far behind me calling my name.

“Jason? You’re here! Better yet, how the fuck did you get here??”

He explained it to me, but I still don’t know how he did it. My mind can’t comprehend how he went from yelling in pain and probably out of the race to making up about an hour and half time and over a mile in distance to catch me.

I’m not going to lie, the internal debate started up again and I thought maybe this could be the excuse to walk off that god-forsaken mountain once and for all. I was miserable and Jason’s cramps were still a problem, but he was of the mind-set to just continue moving forward; one step at a time.

He obviously wasn’t going to quit and I felt like a jack-ass thinking about it.

Then the clock-watching started. I kept calculating the time and distance remaining wondering if we’d make it.

Soon it became dark, almost pitch black, and the headlamps were on. Around 7:00 PM (two hours remaining) and we had just trekked up another slope only to see the next slope 50-yards ahead.

No way, I thought. I told Jason to go on and that I’d catch up. In reality, I was thinking I’d just skip that section and meet him on the way down. It looked to be a relatively small hill and watching others walk by, I expected to see him in about 10-minutes.

Forty minutes later I’m in a panic. I began yelling his name. I sent a few frantic (and apparently nonsensical) text messages to my wife. I didn’t know what to do. He couldn’t have passed me – but maybe he did. Maybe I missed him. Was he already on his way down the mountain? Could he have gotten hurt? Do I leave and continue down myself?

No. Not this time. I had accepted that my race was over. It was about 7:45 PM – an hour and 15 minutes to the course cut off time – but I wasn’t leaving that mountain without knowing what happened to the guy who had gotten me that far.

After calling out his name a couple of more times, I finally got a response. (Turns out, it wasn’t a short, 10-minute hill; it was a large mile-long uphill loop that took him 40-minutes!)

With a little more than hour left, and little choice actually, we continued walking down the mountain.

We walked. We talked. We limped and complained. Well. At least I did. We actually hit another hill (which thankfully was the last). I kept checking my watch wondering when our time would be up.

To make this already long story short, we finished. Eight hours and 25-minutes after starting and just 5-minutes before the race cut-off time. We crossed the finish line and in time!

Jason’s wife was there to put the medals around our necks and there were hugs all around. I think the best moment of the day was when Jason bent over, hugged and congratulated me as I sat on the ground.

Here’s a man who sacrificed so much for me even though I selfishly left him on the mountain earlier on. He listened to me bitch and moan most of the day. I slowed him up in every way imaginable.

Yet here he was congratulating me. Seriously, I didn’t deserve it.

There are people in our lives – and in actions we see taken by others – that remind us of the right way to do things; examples in which to emulate. Jason is one of those people.

More people, including myself, should be more like Jason.