Cutting the cord on cable TV 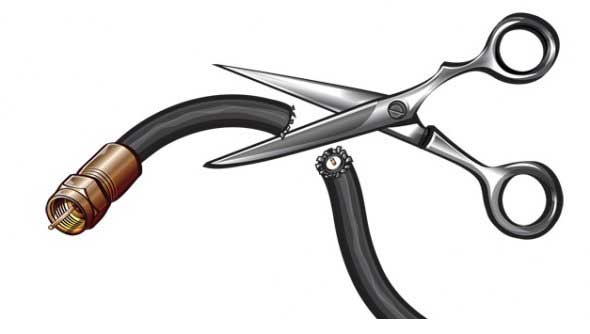 I would like to start today’s blog by reading from a prepared statement:

Today, I cut the cord on cable TV. It was inevitable, really. Millions of people have realized that there are better options out there to Comcast, Direct TV, Dish Network and, in my case, Cox Communications. It’s now my turn.

In reality, though, the decision was made last month when I opened my cable bill and saw it had gone up $49 from the previous billing cycle; a 34% increase. And that’s on top of the 20% increase incurred last year.

It turns out, the initial 2-year deal I had signed expired and my new-customer-special-deal went bye-bye.

Oh. And don’t think I didn’t called Cox Communications. I did. They insisted that my now current rate is the usual charge for their service and that my original deal was “smokin'” (their word). But hey. It wasn’t all bad. They did offer me some sort of loyal customer discount amounting to $10 a month. Ha!

So I left. Cut the cord. I no longer have cable TV and I think it’s going to work out great!

There are actually a lot of options for cord cutters and an almost infinite number of articles attempting to explain those options. You’ve got things like Roku, Sling, Apple TV, Netflix, Google Chromecast, HD antennas or even gaming devices like the PS4 or Xbox One. All, in their own way with their own set-up, can stream a lot of content and programming to your TV or phone or tablet or iPad.

Personally, I talked with my neighbor (who cut the cord awhile ago), looked at articles online and had a wonderful talk with an associate at Best Buy. My wife and I (mostly my wife) did our homework and here’s our solution. Yours, of course, may differ.

Here’s what we’ve got:

That’s it. That covers, really, about 90% of our usual TV viewing as well on-demand movies, TV shows and music offered through the cable companies. Whatever holes might need to be filled – like Fox Sports or FX or TruTV – can be obtained via an upgraded package with SlingTV.

And, AND, we’re not committed to watching only on TV. Again, these are apps and can be viewed just about anywhere, on just about any device with access to the internet.

Our biggest issue, if anything, will be DVR capabilities. Yet with so much available on-demand content and the ability to watch back-episodes of so many other shows via Amazon Prime – perhaps there isn’t much of a need to record stuff anyway. We’ll see…

I’m so glad this was all done in time for a 3-day weekend. I see a lot of binge watching in my immediate future. First up: “All or Nothing: A season with the Arizona Cardinals”