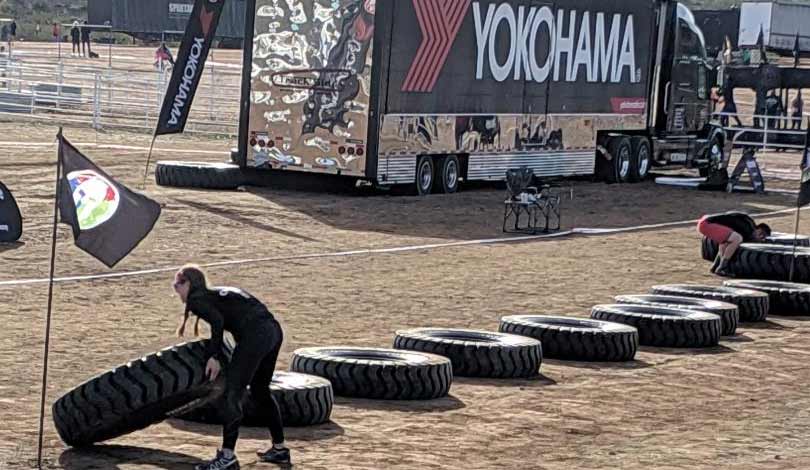 A few weeks ago a fellow Spartan suffered a heart attack while on the course in Chino Valley, California. Though fellow racers and emergency personnel worked to resuscitate him, their efforts proved to be in vain. He passed away soon after.

This racing season, Spartans plan to remember Brian by displaying his bib number in races across the country. I was honored to be one of many who did so this past weekend in Arizona. The OCR community is an amazing one and the thoughts and prayers and tributes to a man most of us never met have been nothing short of amazing.

Everyone reading this should give a silent (or perhaps a not-so-silent) AROO to a fellow Spartan. Personally, I’d love for Spartan Race to take this one step further and retire Brian’s bib number forever.

None of us know for sure what awaits us after we pass but if there is spear throw in the afterlife, may you always hit it and avoid burpees for eternity.

This year’s AZ Spartan Super spanned 8.1 miles – minus the sandbag and bucket carries – at the dusty, sandy, hilly, albeit beautiful desert-like venue of the Fort McDowell rodeo grounds. As has become the norm, it proved to be a wonderful and challenging event. One that, four days later, I am still recovering from.

Toeing the line.
Alrighty. Let’s get this part out of the way: I broke my big toe in the first mile. I ran up to the 6′ wall. Attempted to get over the 6′ foot wall. And, apparently, broke my toe on the 6′ foot wall. The good news was that after failing Olympus soon after, I quickly learned that burpees were out of the question for the rest of the day. Failed obstacles from then on resulted in penalties of push ups or squats.

The bad news, however, was there were seven more miles to go.

The gauntlet
This is the fourth time I have run the course at Fort McDowell and each time the race finished in the festival area with a gauntlet of about six obstacles immediately preceding the finish line. It sort of has become expected; the norm, if you will.

On this day, however, the gauntlet – which consisted of the Z-Wall, spear throw, multi-rig and tire flip – were at the four-mile mark (i.e. the half-way point). Talk about a mental mind-fuck.

Landon, Landry, Barton or Bertrum.
One of the best aspects of obstacle course racing is the people. Early on I met a man – and I feel like a tool for forgetting his name – who helped me on a couple of obstacles and provided some good company on the trails. He was a salt-and-pepper-bearded man from Southern California and admitted that he is more of walker when it comes to these races.

My kind of guy.

For the first four miles we would catch up at some obstacles, then lose each other on the course. We’d share some successes and bitch about the failures. At the four mile mark, just after the tire flip and a steep climb up a hill, I lost him for good. Those two obstacles separated us and I didn’t see him again. I could have used his comradery in the second half.

Barbed wire, mud pit and dunk wall.
Once again, some kudos to the course designer. While it is expected to have a barbed wire crawl, mud pits and a dunk wall at a Spartan Race – it takes a sadistic bastard to connect all three together. And on top of it, the water was cold. Talk about a trifecta of suck.

Tire flip and steep climb.
Flipping a 400-lb tire is not easy though it is certainly easier than flipping it twice. I’m surprised how much that second flip took out of me. My heart was ready to escape my chestoral cavity. And if that wasn’t bad enough, racers were immediately sent up a relatively steep hillside.

Each activity, in and of itself, has a degree of difficulty. For me, doing them back-to-back, nearly broke me.

The (gosh) darn bucket carry
I’ve never been one to hide my feelings on the bucket carry. It sucks balls. The idea of filling a 5-gallon bucket with rocks and being told to walk around aimlessly for a few hundred yards seems pretty asinine to me. Yet there we were…

I don’t remember how many times I set that bucket down and took a seat. I do, though, remember getting snippy with the course photographer…

“Oh. I suppose this is where I’m supposed to smile for the camera to show the world how much fun this is, huh? I don’t think so. Homey don’t play that!”

Though the results showed I apparently made a half-assed attempt to smile.

And so it went on from there… a few more miles of rocky terrain that included a sandbag carry, cargo net climb, slip wall and the fire jump.

Even with the broken toe, I am not asking for any sympathy. Everyone who stood at the starting line on Sunday pretty much knew what we were getting ourselves into. The reasons people do these events can vary but this time I simply did it because I could. There was a sense of gratitude that reminds me that there’s so much more to life than a daily commute, a 9-to-5 job and evenings in front of the TV.

While millions took naps or watched tv on a Sunday afternoon, myself and thousands of Spartans had a shared experience and created a lifelong memory. It was tough, but it was worth it. All of us are better, and stronger, people as a result.