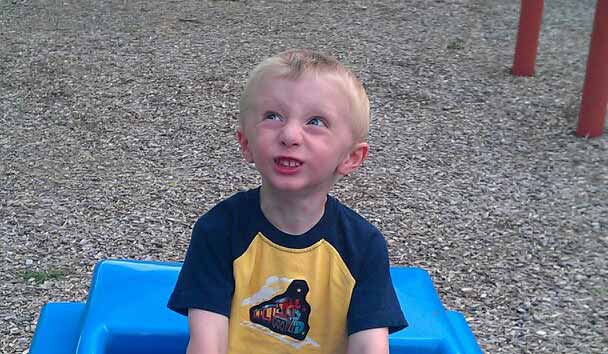 It’s been awhile since I’ve written anything about young Matt and as I look at recent blogs about his efforts to kick autism’s ass, I can see why: the kid continues to show improvement and that’s not really news anymore. I mean, there are only so many ways I can tell you that he’s doing great.

Matt insisted on holding hands out on the playground

As a matter of fact, he recently got in trouble at school for talking in class. Obviously that’s not what we want, but at the same time it is! He’s socializing more; engaging others. He’s been playing with the neighborhood kids, saying “HI” to everyone and is going out of his way to be part of a group. I was told that just today he, himself, tried to convince his aid that class was cancelled. It wasn’t, of course, but he deserves an A for effort.

He’s acting in ways we barely could have imagined just a couple of years ago.

Then came yesterday. He had a bad day, plain and simple. And yes, we all have bad days but for the sake of telling both sides of the story, it’s important to know what a “bad day” looks like for an autistic child. For Matt anyway.

Stimming is the repetition of physical movements, sounds, or repetitive movement of objects common in individuals with autistic spectrum disorders (Wikipedia.org.) In Matt’s case, this often manifests itself in one of two ways: by running around yelling “eeeeee” or laying flat on the ground and sort of grinding.

Sometimes stimming is done when he’s happy or excited and other times when he’s visibly agitated or frustrated. Yesterday, it was the latter. Something was bothering him – and has been lately – though were not really sure what it could be. Still, it was noticeable.

Matt also took to writing on the walls, a white t-shirt and himself. In the case of the walls – it was blue chalk. Long lines of blue chalk winding around the living room leading to a large Thomas the Tank Engine “#1”.

Later, it was a blue marker and his attempt to write the number #30 on his t-shirt. At least that’s what we think but being that he was still wearing the shirt while trying to write on it, we’re not 100% sure. There were also the inevitable blue lines on his arms and chest.

Over the past year or so, we’ve seen dramatic improvement in Matt and his ability to listen to directions and to simply act appropriately. Yet on this day, he continually defied the rules by going into the garage repeatedly by himself and while outside playing, riding his bike where he shouldn’t. He also fought with his brother and wouldn’t stay away from the neighbor’s cars.

Playing outside has been a near daily event since we moved to Arizona but having to constantly watch and correct him is not.

“I fell into the pool”

This one was my fault and trust me, no one feels more like (shit) than I do. I took an afternoon nap and while doing so, Matt went outside and into the pool area. It was one of those times I thank God Matt’s twin is such a tattle tale.

After being woken up and running outside, all Matt kept saying to me was “I fell into the pool!”

He might be telling the truth on that. He might very well have fallen into the pool, but did so after moving a chair to the fence and climbing over the top to the other side. That’s not like him at all, but yet there he was.

Finally (whew!), there was the tantrum thrown when he was told that because he was naughty by going into the pool, he would have to go with his mommy while she ran a couple of errands. I’m sure by some accounts, it wasn’t a very big tantrum but for quite some time now, Matt’s tantrums – usually a result of his general frustration or not being able to find/use his words – have been fewer and farther apart.

And ALL OF THIS happened before 4:00 in the afternoon. The rest of the evening seemed uneventful.

So? Was this all just part of a kid being a kid? Maybe. I mean, it’s not as if kids listen to their parents all of the time; it’s certainly not uncommon for children to write on the walls. And tantrums? I wouldn’t say that babies or toddlers have the monopoly on them either.

But I can’t help but think that something is going on. Something is bothering him. Children with autism are often very sensitive to what’s happening around them. Could he be feeling the stress of his parents? Are there problems at school? Have there been changes to his routine that’s affecting him? I don’t know and that’s kind of scary.

I’ve said it before and will say it again: I’ll take Matt, his manners, his behaviors and his quirks over most other kids any day. He’s a great kid and God has he come such a long way.

Yet it’s days like yesterday that serve as a reminder that no matter how much he’s battled or how many goals he’s exceeded, he is still autistic and, like the rest of us, still prone to “bad days”.