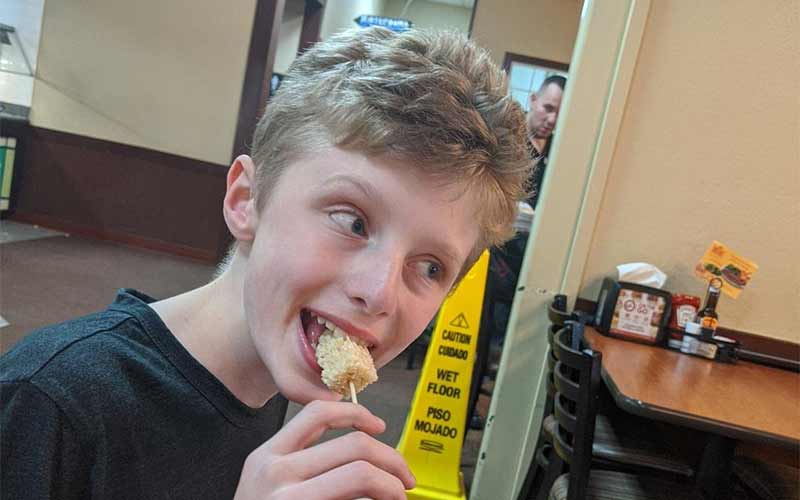 Let’s recap a conversation from a three days ago…

Did I mention he’s very literal? It’s the autism, I know, but you’d think after 8+ years of dealing with it, I’d learn how to better ask these questions to get more explicit answers.

But ultimately that was the conversation. On Tuesday, young Matt opened his locker at school and inside there was a Golden Ticket. That ticket was worth $5 to be used at an upcoming book fair. I think we all just assumed they were hyping up said book fair and gave out a few coupons.

Until the next day…

Not my restaurant of choice, but I didn’t just win Student of Month. Nor am I the one who has to prove myself every day in 6th grade and show everyone that autism doesn’t hold me back.

Matt won it. Matt earned it. He is the one who has to constantly control his emotions, keep his focus and to demonstrate daily that he belongs in the mainstream classroom.

He doesn’t see himself as a special needs kid/person/student and has worked very hard to show everyone else the same. In some ways, I think that’s why he won Student of the Month. It was just another example of how his hard work and determination doesn’t go unnoticed.

And if you needed more proof that he’s integrating just fine in his first year of middle school: report cards came out a couple of weeks ago and he received three As, a B and three Cs. His 2nd quarter GPA was 2.83.

Had you told me on day one of 6th grade that by February he would get Student of Month and his first two report cards would total six As, three Bs and five Cs – I would have taken that in a heartbeat. (Though as I compare the two report cards now I see he dropped from a B+ to a C+ in Science; which I didn’t notice before. We’ll have to talk about that when I get home…)

And for just a little more icing on the proverbial cake: young Matt bumped up another half belt in Taekwondo this past month. He’s now a green belt with a black stripe.

Autism has forced that kid to work harder just to be average. Someday, he’ll be asked to take it up another notch or two (or ten.) Until then, however, we’ll continue to enjoy watching him kick autism’s ass. Over and over again.