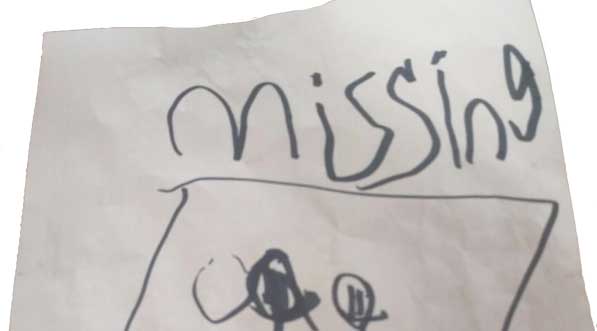 To be honest, I’m not sure if the following story is humorous, stressful, worrisome or ultimately trivial in nature. The reality is that it’s probably a combination of all four.

However, it is one that should be told; if nothing else to convey what it’s like raising a child with autism or perhaps provide a glimpse as to what it is to be autistic.

On the weekends, the twins often play with their friend Riley. They ride their bikes, go to the park, hang out inside the house, etc. doing whatever it is eight and nine year olds do on a Saturday. Sometimes they all play together while other times, unfortunately, Matt – my son with autism – gets left behind or excluded all together. I won’t say that he gets ditched (per se) but let’s go with that for now.

The other day, young Matt comes running into house crying hysterically. He’s upset that he can’t find his brother and Riley; screaming that they’re missing and that we have to find them.

Attempting to calm him down, my wife and I emphasize that they’re not missing and that they’re probably just at the park down the street (which turned out to be the case). We suggested that he go check out that area to see if he could find them, yet the tears continued with the insistence (and screaming) that they were missing.

Oh. I’m sure you can see the resemblance…

Matt then went into a search-and-rescue mode with the ultimate goal of finding his brother and friend. The first thing he did was to create a “MISSING” poster. Of course, I tell him that’s not necessary and that he should just go to the park, but through the tears, he proceeds to make the poster anyway.

Moments later, he’s out the door and on the hunt for his brother and “missing” friend.

As it turns out, the second thing young Matt proceeded to do was to take the aforementioned poster and go door-to-door telling the neighbors his brother is missing and asking if they’ve seen him around. This might have been alright if he kept to the immediate neighbors to our left and right, but no….

We honestly don’t know how many doors he knocked on. What we do know is that he ended up about a half-mile away on the other side of the neighborhood – perhaps 25 houses away. Fortunately (or not), someone became concerned about an 8-year old wandering the neighborhood looking for his lost/missing brother.

Shortly after, a pair of police officers are knocking on our door. It was the first, and hopefully last, time the police come to the house as a result of our child’s actions.

On the one hand, it showed a genuine concern on Matt’s part for wanting to take action after convincing himself that his brother and friend were missing.

On the other hand – despite what both his mother and I told him – he still convinced himself that his brother and friend were missing and that he needed to take action.

This was certainly the autism at-play. Although I’m having difficulty explaining exactly how. Would an average-developing 8-year old do something similar? Sure, it’s possible but I think unlikely.

I think this was another learning step in how – or perhaps how not – to process emotions and reactions to the every day. He was given a problem and, like all of us really, went through the checklist of solutions in his mind. This wasn’t necessarily the wrong solution, but one where there were certainly better options.