Two Out of Three Ain’t Bad 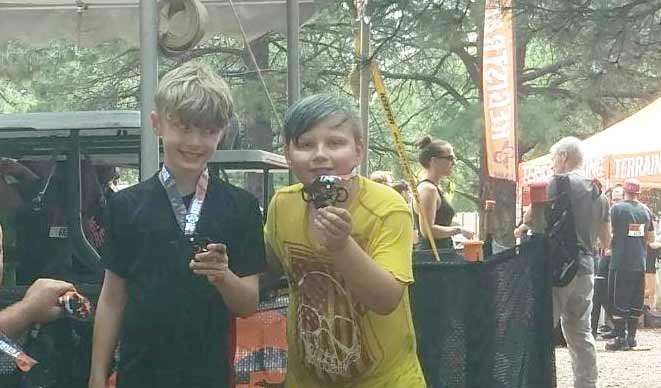 This past weekend, the twins and I ran Terrain Race in Flagstaff, Arizona. It was so good in so many ways and there are a lot of thoughts and mini-stories to tell.

First and foremost, Terrain Race puts on a very good event. It is a 3.2 mile obstacle course race (OCR) with about 20 obstacles that range from climbing over walls, a wreck bag carry sloshing through water and my new favorite, Sledge Hammer Hockey. From everyone standing in a cold, muddy, pool before the starting gun even goes off to the overall family friendly environment, it’s a race that I hope continues to be successful for a long time.

Now. Until I truly figure out my why when it comes to these races, my motivation is currently three-fold: the cool finisher medal, the t-shirt and the free beer at the end. Terrain Race has never disappointed in the past but on Saturday, there was no free beer. I’ll let it slide this time, but if I’m to go through 3.2+ miles of getting wet, muddy, sweaty and dirty – there had better be a cold brew waiting for me at the end.

We call ourselves The Muddy Millers and unfortunately this weekend we were missing our strongest member: my wife. She stayed back to be with her father who is dealing with some health issues. She’s sort of the glue that keeps the three Miller men together and organized and on-time and hydrated and well-fed and so much more. Her leadership and also her strength, inspire us all.

This weekend, though, the twins and I talked about pulling from grandpa’s strength. We talked about the obstacles he’s going through and dedicated our race to him. Yeah, I know. In some ways they’re just words. “Dedicating” a race to someone can seem a bit unnecessary, but at the very least it kept grandpa and his current struggles at the forefront of the kids’ mind and who knows? Perhaps it helped them better focus on the obstacles they faced that day. 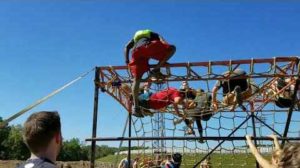 There was one obstacle that both twins were scared/hesitant of. I’ve been trying to find the official name, but it’s a cargo net climb where you step up a couple of metal bars to the top of the structure and then crawl across a cargo net about 10 feet in the air. Thier little arms and legs couldn’t quite get them to the top and Son #1 said he was scared and Son #2 said he couldn’t do it at all.

Myself and a few other racers were having none of it. They could do this obstacle. They just needed a bit of a boost to get to the top. Once there, though, they easily traversed the net. Son #1 went back and did it a second time. The volunteer told Son #2 he conquered it better than many others he saw that morning.

Many times, these obstacles are much more mental than physical. Once the twins got over the mental hump, the climbing, the crawling and dismount off the net were easy. 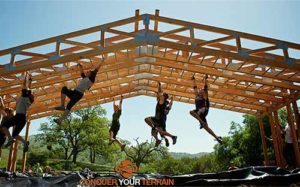 This day was truly all about the twins. It was about working together as a team to complete some obstacles and creating an experience I hope they won’t ever forget. The three us flipping the tire or them carrying a 25-lb wreck bag or boosting them up and over the walls gave me an incredible sense of pride as a father.

Yet it was the monkey bars that brought a smile to my face. Being a big(ger) guy, monkey bars and gravity aren’t my best friends. Additionally, the Terrain Race monkey bars incline up before going back down (see picture). In the past I might’ve done four or five rungs; I certainly never made it to the top. Saturday, though, I hit eight (though perhaps more) and made it to the peak where I had one more rung to go before starting the decline (which I can only assume is easier).

However, I stalled, said a semi-silent “Oh shit” before plunging into the cold water below. Still. It was a personal best. 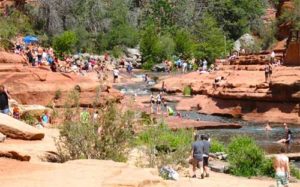 Taking road trips to do these races aren’t always about the race itself. In the past, we’ve travelled to Temecula (CA), Tucson and Flagstaff to run these races. Each time, however, it’s been more about the experience and the bonding.

We slept in a tiny teepee the night before the race at the KOA Campground. After the race, we went to Slide Rock State Park where the kids swam in the creek. And due to the large number of visitors who had the same idea we did, we had to park about 3/4 of a mile away and walk to the park – an adventure in and of itself.

A teepee, the Terrain Race, Slide Rock and a road trip through the mountains of Arizona…

Who knows? Maybe I truly have found my why when it comes to OCR…