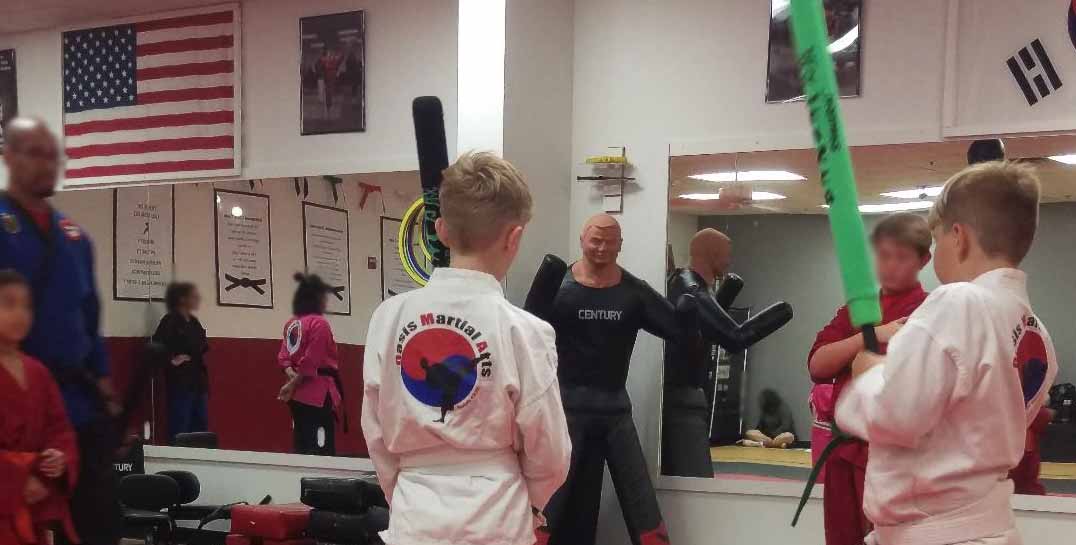 A couple of months ago, we enrolled Matt and his twin brother in Taekwondo. It was a way to help keep them active, provide some discipline and focus, and to learn a little self-defense a long the way. (Truth be told, I think they just wanted it to be all about weapons training so they could beat the crap out of each other.)

When my wife and I first approached Oasis Martial Arts, the very first question we asked was whether or not they even accepted children with special needs. The answer was resounding Of course! along with some appropriately asked follow-up questions to better understand Matt, his diagnosis, abilities, etc.

Master Redmond, the school’s founder, told us that they’ve worked with children on the autism spectrum in the past and touted some of the success they’ve had in doing so. As with any child, really, as long as Matt was committed, they would find a way to work with him.

He then told us a story of a child in a wheelchair who wanted to learn martial arts. In order to accommodate this young man, Master Redmond and his staff did a lot of research and came up with a certification plan which would allow for the training of this child. Again, he reiterated, if there was a willingness on the child’s part to learn, there would be the same on the school’s part to teach.

Of course I still worry. I worry if Matt’s autism will prevent him from staying focused and learning. I worry if it might affect his commitment to himself, to learning and to his instructors.

And, of course, young Matt continues to prove that I need to stop (frickin’) worrying.

The point of all this, really, is to continue to highlight that despite his autism – Matthew is very much like any other child. He’s worked hard at it, to be sure, and his resiliency in overcoming whatever life throws at him has been remarkable.

He’s transitioning out of his special needs class at school. He recently aced two big projects at school – a book report on Paul Revere and a science fair project on magnets. He plays soccer, loves going to the drive-in, competes in obstacle course races, is now taking Taekwondo…

Too often I read (or hear) from other parents with children on the spectrum and many seemed resigned to the fact that their child can’t (or won’t?) ever be normal. That may be true, as every child is different, but I truly believe if you push a child to be better, they’ll be better.

Matt is certainly proof of that and as I’ve said time and again, he’s not letting autism define who he is.

In a few days, Matt will be testing for his orange belt. Skills he will be tested on include:

What I worry about, though, is actually two-fold. One, will he stay focused enough to answer rapid-fire questions not only on the facts he’s already memorized, but the kicks, punches and blocks required of an orange belt.

And secondly, Matt’s favorite color is orange; to the point it’s almost an obsession. While I know he can do what’s needed to earn his orange belt, in the back of my mind I’m wondering if he’ll ever want to move past earning the orange belt.