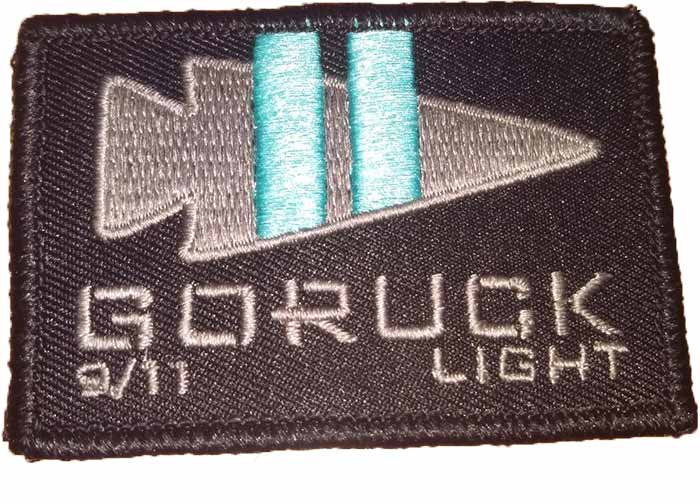 By definition, the GoRuck Light is “an introduction to the team-based training found in Special Operations.” It is billed as a 4-5 hour challenge covering 7-10 miles. 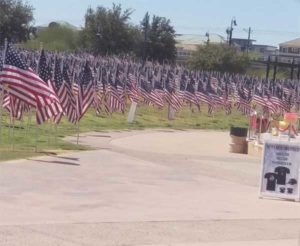 The GoRuck Light Challenge in Phoenix (Tempe, actually) on September 8, began and ended in the 9/11 Healing Field at Tempe Town Town Lake. A fitting – and emotional – tribute to those who died that day and to those who have fought bravely for our country ever since.

Led by Cadre Derek, a former Special Forces Operator who, probably single handedly, could win the war on terror, our class consisted of 24 people who all worked so incredibly hard to challenge not only each other, but also themselves.

All participants are required to bring a rucksack (aka backpack) with a 15 or 20-lb ruck plate (or equivilent). For me, it was a general purpose backpack with a 25-lb barbell plate seen at most gyms. The cadre asked if I had ever rucked with that type of weight before to which I said no. He just nodded his head and said “Ok”. Apparently, I had made things more difficult before ever taking the first step.

Additionally, we all needed our own hydration bladder, bottled water, any food/snacks we chose to bring and an American flag to lead the way wherever we went. The cadre also brought a 5-gallon water bottle for drinking, several smaller water containers, some planting soil, two bags of rocks and a couple of small plants (more on that later)…

After splitting into two teams of 12 – and with over 3,000 American flags as a backdrop – we all lined up to start our warm up in what I can only assume was somewhat typical military fashion. The warm up consisted of push ups, four-count flutter kicks and leg lifts, as well as burpees. With the 2 PM Arizona temperatures already north of 105 degrees, sweat came (and went) quickly.

Then with rucks-on and the flag-bearer leading the way, we engaged in perhaps a mile long hike across a bridge to a small, sand-filled, beach.

Keep in mind, too, this entire event took place on the campus of Arizona State University at a time when the Sun Devils were playing Michigan State. There were a lot of cars and thousands of people milling about. Students were kayaking in the water, riding bikes, tailgating and, truth be told, I think I saw a young couple engaging in public coitus.

We hit the beach and were immediately sent into waist-high water. Cadre Derek led us through a few exercises along with a few threats of punishment should we fail to complete those exercises to his satisfaction. We passed… and were completely soaked.

Back on the sand, the next instruction was to dig a 5×5 foot hole and 2-feet deep. The winning team got to choose the punishment for the losing team. After all, as they say in the SEALs and in the Army and in the Marines – it pays to be a winner.

My team lost and were sent back into the lake for some water burpees (which were kind of fun, actually) while the winner enjoyed their victory and break.

Then came the most difficult stretch of the entire day (for me anyway).

First, we were instructed to completely bury our rucks into the recently dug holes. Afterwards, we learned of the four types of acceptable buddy carries: fireman carry, piggy back, baby carry and the Estonian wife carry (trust me: click the link).

Each person had to do each carry for about 25-yards and I struggled. Mightily. We were ALL wet, sandy, breathing heavily, extremely thirsty and our water was buried in the sand.

Next, each team filled their two open-ended water bottles with lake water and began what’s called an “Indian Run” (though in today’s PC world, a Tribal Run) where each team lined up in a row and began walking. The last person in line has to run to the front where the process was continually repeated.

The challenge now became: whichever team spilled the least amount of water from the jugs was the winner. And remember: it pays to be a winner.

This lasted a couple of miles, through traffic, across intersections, a stop at a Jimmy John’s to refill our drinking water and once again across the bridge over the lake.

Fortunately, I guess, this challenge ended in a tie as both teams spilled an equal amount of water. No additional punishment was given.

The Mogadishu Mile refers to a route that was run by United States Army Rangers and Delta Force soldiers from a helicopter crash site to an appointed rally point held by the 10th Mountain Division on National Street during the Battle of Mogadishu on October 4, 1993. (Wikipedia)

Cadre Derek said that “one-third” is the most a team can lose on the battlefield and still maneuver, escape and fight. One-third is hurt, another third has to carry the injured and the last third fights.

Thus, one-third (four people on each team) became “injured” and needed to be carried – for a mile. Remember: there are four acceptable buddy carries (see above). (Un)fortunately, being a big guy – I was not chosen to be injured and be carried. And, admittedly, I shied away from being the one doing the carrying.

That said, I did have to carry the rucks of my teammates. So I had my own 25-lb. ruck on my back, another on my front and a third in my hand. As much as I would like to complain, I had it easy compared to those carrying and being carried. It was a hot, brutal, day and those guys (and girls) worked their asses off.

Oh. And we still had a 5-gallon bottle of drinking water, a couple of bags of rocks, planting soil and a couple of plants…

Behind Arizona State University’s football field, there is a mountain. It is not an overly tall mountain, but the incline is quite steep. I had visions of the Spartan Beast in Big Bear but in reality, ASU’s mountain is not even comparable to the suck that was Big Bear.

It was at the base of the mountain – and at the end of the Mog Mile – where we got a bit of a break to refill our water and to plant the little cacti. It relieved us all of having to continue carrying the two bags of rocks, the bag of soil and those little plants…

We hiked up about 100 feet short of the peak before heading back down. Some people were disappointed not to have gone all the way, but when Cadre Derek reminded us of the four acceptable buddy carries (see above) – people immediately changed their tune. No one wanted to carry anyone another 5-feet, let alone another 100 feet up a mountain.

Approximately four hours and 24-minutes after we started (and perhaps a distance of 5.5 miles), we were once again lined up near the 3,000+ American flags at the 9/11 Healing Field. It was over.

Cadre Derek spoke to us about why he loves doing the GoRuck Challenge. He said he loves seeing “smoke come out of people”. And not the physical smoke that comes off the body when sweating. He acknowledged all of us pretty much stopped sweating 30-minutes in…

By “smoke” he was referring to the determined looks on our face, our attitudes, our grit and the no-quit mentality it takes to complete these types of challenges.

He spoke to each of us individually; congratulating us and giving us our GoRuck Light finisher patch.

As he shook my hand, he looked me in the eye and said “Smoke”. I smiled and said “Did I really look that pissed off?”

“No,” he said. “You just had that look that told me you weren’t going quit. That you were going to take it all one-step at a time and you were up for challenge. It’s the same look that says you’ll be back to do this again.”

“Ok yeah… you did look a little pissed off, too.”

I believe that I was the only person he called out personally when referring to “smoke”. In a way, that was sort of humbling. That said, at least as of now, I do not plan on doing another GoRuck. At the very least, it is not in my vision right now.

Afterwards, while abusing the free-refill policy at McDonalds, I reflected about what had just occurred: the 107 degree heat, the 9/11 memorial, the weight, the work, the carries, the comradery…

I know have such a long way to go to get to where I should be in terms of physical fitness. I hate the fact that I am bigger than most people who do these challenges and races. I understand my self-confidence is not as high as I would like it to be.

Yet there is little doubt that experiences such as last weekend’s GoRuck Light builds a mental toughness that – although I’m not sure I can verbalized how – serves me well on a daily basis.

As much as this challenge sucked, I truly believe those of us who went through it are better people as a result.